It’s been almost a year since my last post. (Sounds like the beginning of one of my childhood visits to a confessional)

But I have been busy!

The past year has been both the most exciting and the most exhausting of my freelance career. This coming September will bring the debut of my very first illustrated children’s picture book.

This is the scene last January as I was packaging up the paintings to mail to the publisher. The name of the book is The Nutcracker Comes to America: How Three Ballet-loving Brothers Created a Holiday Tradition and it is written by the amazing Chris Barton. More to come on that later.

After a small breather in March, I learned that I was awarded the contract for a gigantic mural project in Ann Arbor. Commissioned by Oxford Properties, it will be painted on two wall surfaces just north of Afternoon Delight on Fifth Avenue. The lower mural is on the south facing wall of Oxford’s office building and measures 125′ x two stories. The upper mural will be painted on the 3rd and 4th story walls of another office building directly north of the first wall, owned by Rene Papo. This wall is not so long, ONLY measuring 54′ wide. I have never done anything like this in my life but I’ve learned a lot and will learn a lot more before we finish. It will be a grand adventure!

I’m working with three College for Creative Studies students, Kyle Scott, Andrea Del Rio and Anna Posey. Last week, with the able assistance of my good friend Middy Potter, my son Ian and my sister plus family, we transferred the two-thirds of the design to the wall at night using a digital projector. Scaffolding went up on Friday of last week and we put the first paint strokes on the wall this morning before the rain chased us out. The guys at Delux Rental in Ypsilanti were incredibly helpful to my ignorant self. I now know more about scaffolding that I’d ever imagined possible. This is the boss’s son giving instructions to his assistant. 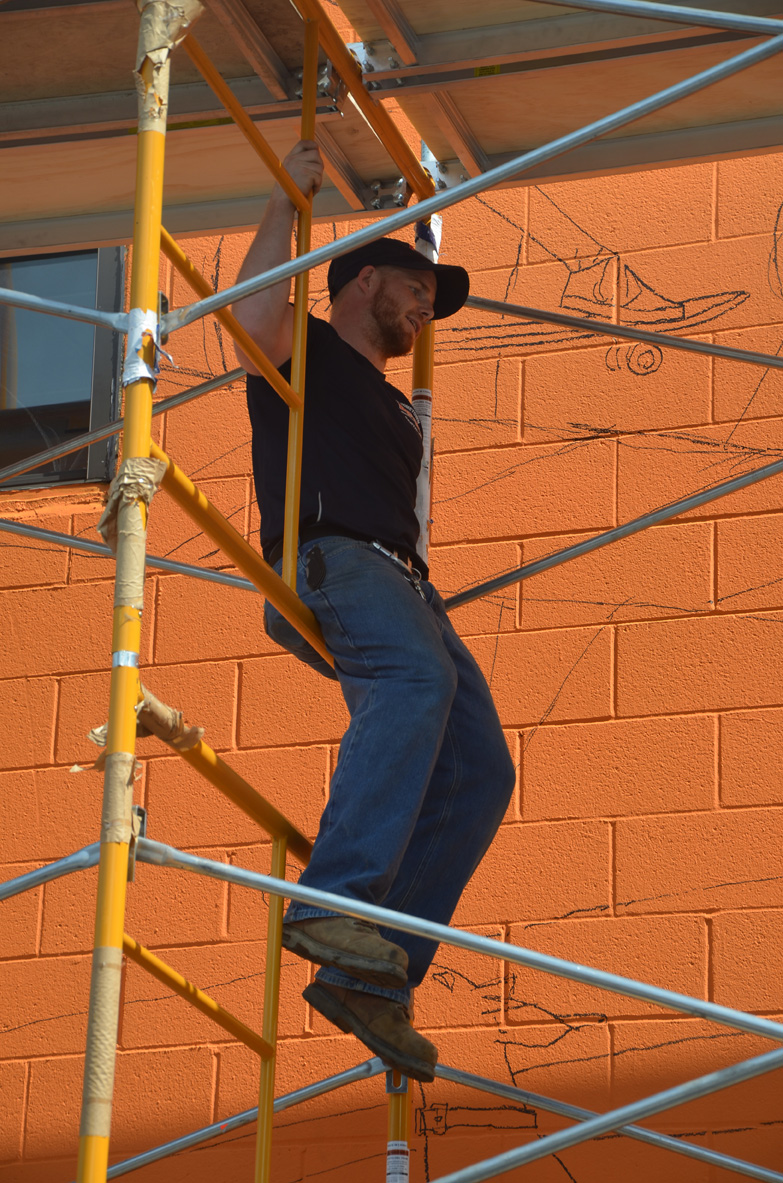 Part of the bid included a proposal for a video of stop-action progress of the painting, with interviews and process added in. I was so very fortunate to find an amazingly talented videographer, Patrick Murphy, who had graciously agreed to take on that portion of the project. Because of Patrick, my idea of a iphone-shot amateur production has suddenly turned into a very professional endeavor!

I will post as often as I can with pictures and more info as we make our way along the painting process. And now, on to painting during Art Fair. Oh, boy.